“John H. Cunningham’s “Crystal Blue” will make you a Buck Reilly fan, if you’re not already. Cunningham’s ability to take the Antilles, a collection of tropical Caribbean islands that spreads out from the Bahamas and ends off the coast of South America, and turn them from sandy beaches and bars of Paradise to a precarious locale whenever Buck Reilly shows up is unique. Along the bumpy and exciting ride, you can expect Reilly’s eclectic group of friends and miscreants to show up, along with his nemeses FBI Special Agent T. Edward Booth – who is not above blackmailing Reilly to get what he wants.

Click his link to check out all of his books and to purchase them     http://www.jhcunningham.com/fiction.php

Searching For One
Particular Harbor
by Gordon England


For all you Parrotheads out there who feel the pull to run away from the world and wander the tropics, this is a mostly true account of how Gordon England left his thriving career and moved to the Bahamas in search of spectacular reefs, big fish, and the perfect tiki bar. You can smell the salt air and hear the steel drums in these escapades of living and working in the land of turquoise water, rum drinks, and golden sunsets, where he found a few of Buffett’s elusive harbors far away from the tourist traps. More books, photos, and videos can be found at www.islandtales.biz
Order at
Amazon.com

Sleeping Dogs Lie
by Rodney Riesel
A mystery taking place in the Florida Keys, Sleeping Dogs Lie, is the first installment of the story of lottery winner turned private detective, Dan Coast.
Dan, a wise-cracking excessive drinker, is haunted by the memory of his dead wife. Shortly after the two won the lottery and purchased a small beach bungalow in the Florida Keys, her life was taken in a car accident. Soon after his wife’s death, Dan relocated to the Keys with his wife’s dog, whom he blames for her death.
In Sleeping Dogs Lie, Dan Coast, an unlicensed Private detective of sorts is hired to find the missing boyfriend of a woman who herself soon ends up missing. When someone from the woman’s past unexpectedly shows up at Dan’s home, with a story of faked deaths and missing life insurance money; Dan along with his side kick Red set out to find the money, and the woman.
Purchase now at Amazon.com
www.rodneyriesel.yolasite.com

Books of Humor
written by
J. Harold Lowry
J. Harold Lowry writes about the funnier side of life. He explores life, music and the lifestyle of Florida and the Florida Keys.  J. Harold's latest release "Key Lime Floats" is a continuation of his literary travles through the Keys, has been getting rave reviews, and is a Top 10 entry on the BFR Best Seller's List.

A Good Life All The Way 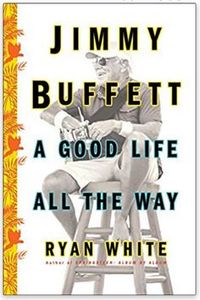 This book is filled with interviews from friends, musicians, Coral Reefer Band members past and present, and business partners who were there. This Book, from acclaimed music critic Ryan White, is a top-down joyride with plenty of side trips and meanderings from Mobile and Pascagoula to New Orleans, Key West, down into the island, an into the studios and onto the stages where the foundation of Buffett's reputation was laid. This is finally the full story of Buffett's rise from singing songs for beer to his emergence as a tropical icon and CEO behind the Margaritaville industrial complex, a vast network of merchandise, chain restaurants, resorts , and lifestyle products all inspired by his ode to a lost shaker of salt.

TROP ROCK SONGS STORIES and TALES
as told by the Singer/Songwriters
by Andy Forsyth
Be sure to check out this book about your favorite Trop Rock artists. These are the stories about their songs as told by the singer/songwriters. It also makes a great gift. Only a limited number are remaining. The book is full of color pictures and includes the lyrics to nearly all the songs as well. You can go to the web site above and read a few stories, see some of the pictures. You can also “contact us” to order.
There is also a 3 Volume CD set to go with the book. 47 songs total on the CDs
The Trop Rock book and CD is now only $60 and of that $10 goes to charity. (This is a $115 value, $70 book $45 for all 3 CDs)
The remaining Books and CDs won't last long. So get yours before they're all gone!
Email troprocksongs@yahoo.com and we will invoice you on PayPal and get the books and CDs to you the next day.

A Trop Rock musician just published a book. How unique is that!
The book Key West Chris wrote is one that probably anyone who has spent time at a bar can relate to, it's called:

I think the title kind of sums it up. There are 23 chapters all telling a different story. Some funny, some serious, some semi-true, some composites of several stories. But one thing is common. They are all a lot of fun. You can download the book from Amazon and it downloads to your Kindle for Free or you can buy it as a download file. Just go to Amazon and type in Bar Stories, it's the first one that pops up.
Amazon link HERE  and Facebook HERE.

Leaning On the Lyrics
by Linda Hebert

When tough times left her not knowing which way to turn, this life-long music lover found solace and even some direction in her favorite songs. "They say that writers need to find their voice and identify their muse (source of inspiration). I know that my muse is music and my voice is a collective one echoing the many songs stuck in my head. You see, since I was a little girl, I've paid close attention to the songs on the radio and somewhere along the way I subconsciously began storing memorable lyrics in the back of my mind, supposedly in case I might need to refer to them later. By the summer of 2007, 'later' had arrived in my life. This book is a whimsical journey of songs, many will bring you to Margaritaville."

305 pages and hundreds of artists in a feel good story for all. $1 of every book Sold is donated to:
Wounded Warrior Project & Make-A-Wish Foundation